Dail Behennah recently conducted a fascinating 2 day master class developing 3D structures out of paper at Heart Space Studios. She brought with her prepared strips of black and white paper to get everyone started quickly so that they could move swiftly onto the really wonderful papers we had collected for the group to experiment with; however the group had different ideas!

I feel that these exquisite samples swayed most members of the group to stick with the simple black and white theme, but also they each confessed to not wanting to waste any precious time cutting up the experimental papers into strips.

Dail also gave everyone a set of miniature clothes pegs, they were all intrigued..

Although Dail had said to everyone to feel free to plait the square base in any order, most people did a simple alternating black and white placement…it now became clear that the initial placement largely controlled the resulting pattern for the structure’s ‘walls’…..

eventually fresh strips were added to interweave with the basic plait structure – red seemed to be the favoured colour.

However when these basic structures were viewed they revealed wonderful geometric patterns from this simple 4 cornered structure.

Next the class were given free reign to just start off again, now knowing how to build up from a simple solid foundation and turn a corner –  where would they take this new knowledge?

And here we started to see the preferences of the different people in the class; their own practices stared to influence what they made; so Liz Hewitt, who amongst other things is a book binder and textile, plaited a concertina form that was reminiscent of pages of a book opening up…..

Shirley Paskes, who is a an enameller and felt maker made a small hat to wear, she also makes felt clothes. The only person to get away from the black and white range was weaver, Deborah Paul, who chose to remake a smaller version of the original shape in a new material –  grass green plastic.

On the second day Dail introduced the group to another structure,  Hexagonal Plaiting, this looked remarkably Japanese to me, although it was explained that these structures are universal and timeless – found on everything from fishing creels to engineered steel structures and it is the plait that is known also as Shaker Cheese Basket

So following Dail’s elegant diagrams everyone started to make another plait either in  pure white paper…or dramatic black and white. Once the hexagonal base has been turned more strips are woven in to grow and strengthen the shape.

Eventually a firm rim is plaited in to finish the structure.

For the final session of this master class, everyone was given a choice to continue making these open-ended forms or to attempt Dail’s signature object, a  plaited ball made of steel rope…

Several people wanted to try the steel rope ball,  but others attempted the closed structure in alternative materials…and some with alternative plaiting patterns – let’s just call them free – form.

It appears to me that if you have not got a strongly developed left- brain grasp of spatial mathematical awareness, the convoluted plaiting is a really difficult thing to attempt – I say this as a totally right- brained maker. However, free – formed or perfectly symmetrical, the moment the pegs are released from the plaited structures is a moment of truth for everyone…

Interestingly a couple of people went  back to their own practice and plaited the balls using knotting and stitching to secure the structures. 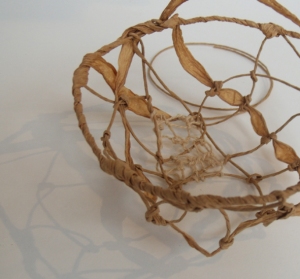 I think that these samples are starting to develop lace like structures and I suddenly saw a way that I could possibly stitch into these shapes with a needle and thread. The interlacing stitches cast intricate shadows from the final structure. This very delicate structure made by Debbie Paul  is made in string and straw ribbon.

However the steel ball proved to be the ultimate challenge, and it was interesting to see how the were formed. I had thought they were made from a single length of stainless steel wire – but in fact the wires are all cut to size first, curiouser and curiouser.

the following images show the slow and strong construction in progress :-