The new Heart Space Knit & Stitch Club had its second meeting with a “Show and Tell” session, meaning everyone was asked to bring a piece work, preferably textile, either something or their own making, or something inspirational, held memories that they could talk about.

Debbie Bird, who is one of the our regular tutors ( and has agreed to be a leader for some of the club’s stitching sessions) showed 2 completely different textiles. One was a richly embroidered, patch-worked landscape that she had made at a weekend workshop run by Ineke Berleyn the colours sang out and Debbie told us that she was thought it very inspirational as she had lots more ideas to develop from this workshop. The other piece she had brought could not have been more different…

It is a patchwork quilt made for a child, out of scraps she had left over from patchwork commission; she just pieced it together from what she could find quickly and because she enjoyed making the first quilt so much. What I liked about her ‘show and tell’ was that she showed 2 sides of her work,  she brought them to explain that if you love textiles you tend to love all manner of different textiles, so the club should be varied in its approaches to what we have to make together.

Clare Griffel who is also a leader for the club, showed some very simple knitting, a long scarf knitted lengthways to look like a woven fabric, and talked about the problems of casting off. The method she had used  for this was too rounded and caused the scarf to roll, this started her on a quest for different methods to achieve flat edges – something she will be able to help others with on the knitting nights.

But she also brought a purposely rolled piece of silk knitting that makes an unusual necklace (we sell these in our shop Space) and everyone including the stitchers wanted learn how to make this. And she showed a book that had inspired her and recommended to us all, an knitters almanac by Elizabeth Zimmermann, I will get more details about this at the next knitting session of the club. 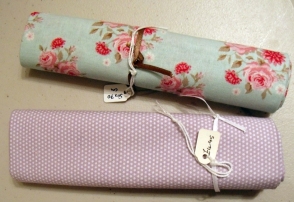 Not everyone brought along things they had made, Clare showed us 2 lovely rolls of cotton she had bought from my favourite Bristol craft shop, Creativity,  she intended to make summer bunting with it and we all agreed we would have been tempted by them as well, they were so beautifully but simply presented.

Sophie showed some images she had learned to print onto fabric at a recent series of Teresa Searle’s evening class at Heart Space, she intends to embroider into them.

After the ‘show and tell session, both Clare and Sophie went into the large studio and started making…with plenty of pink fizzy fuelled advice from the rest of us. Yes I know that we shouldn’t have a drink on the work table but it was a pre – Christmas get together.

Meanwhile we had other wonderful things to look at, Jan Connett, a stitch club leader showed embroidered shoes she had bought in rural South West China….

we were all intrigued by these and spent a long time inspecting the needlework, including pattern darning, couching, chain stitched fillings with heavily quilted soles, everything hand stitched and then sequined!

Then another embroidery made at a workshop, Carol brought in a proper old-fashioned needle-case, made at a Kelly Aldridge class.

I am very intrigued in who goes to classes and who doesn’t – I don’t, it has never occurred to me go to another embroiderer’s class (except when I check into Heart Space classes) I just go to books or museums to study other embroideries for information; maybe I am too insular in my outlook. I have however gone to many other types of workshop in pursuit of my own development, jewellry, metalwork, enamelling, photography, all things I can’t imagine how to do at home alone.

But a real advocate of workshops, particularly ours, is Libby, she couldn’t make our first workshop so sent her sister instead, and then using the diagrams and notes that I had provided for the mirrored hearts, brought in her versions and also some sock pigs….she was laughing, rather sheepishly, as she was pulling these out of her bag  – it must have been my face – what on earth was she going to show us – here was I thinking how wonderfully eclectic everything has been and now – Sock Pigs?

Well what a surprise, they were adorable, and what is more very exquisitely made. Libby is a really good needle woman, she had re-made the pinned and beaded heart some months ago so I know how much care she takes, but these funny little pigs were her version of some she had been taught to do elsewhere –  I especially liked the tails….

and what did I show?  Well they are things already contained in the blog the mended white Edwardian blouse from my very first post and the Bleeding Flowering Heart. which is in the Heart pages. I am so looking forward to the stitch club developing, we seem low on knitters and this is reflected in the post. But next time I will redress this and concentrate on the knitting members. We plan to meet every week on a Thursday night  so there should be plenty to report on judging by the variety shown by members at these start-up sessions.