I have been researching a new course to run at Heart Space Studios for the autumn and winter months – making a kimono, well a shortened version of one really – more of a jacket but using several techniques found in traditional kimono. Many years ago, I visited Japan on a Royal Society of Arts bursary to study kimono design; my way of seeing the world was never quite the same again and my textiles changed radically. I adapted several of the dyeing, stencilling and embroidery techniques for my own work but I never made an actual kimono.

Everywhere, everything I was ever served to eat was a visual delight, which more than made up for the fact that I first found the food bland and boring to eat; everything looked so -well – Japanese!

I eventually got to like some of the food, particularly the lunch boxes of Sushi…now a regular food everywhere – but in 1981 I had never seen a roll of rice and fish and seaweed before.

When my Japanese family saw my drawing they thought I could write and therefor speak Japanese, and when later that evening I drew the recipe for Tempura, they were sure I was fooling them with my non existent Japanese vocabulary… I began to see the difference of the Western style of drawing and the Eastern ways of seeing and recording.

They simply could not understand that I could perfectly copy the label for the leeks and not be able to read it. And when I drew their daughter Kyoko asleep under the table and it LOOKED just like her, they thought I was an artistic genius. I tried to explain the difference between the Western art education – educating the individual to draw directly from life as opposed to the traditional Eastern way,  learn from a master the key symbols for each item and emotion……

And that is when the bartering started, wherever I went I drew a picture of the people I visited, they gave me something or even better demonstrated a technique for me – I went to Kyoto almost daily to study traditional textiles, meeting with designers, weavers, spinners, embroiderers of kimono, I swapped these stencils for a drawing of the artist who cut and made them.

The only rustic ( and now the most fashionable) fabrics I saw and recorded, so unusual were they, are these dolls in a museum, dressed in shibori patterned rustic clothes of the 19th century. 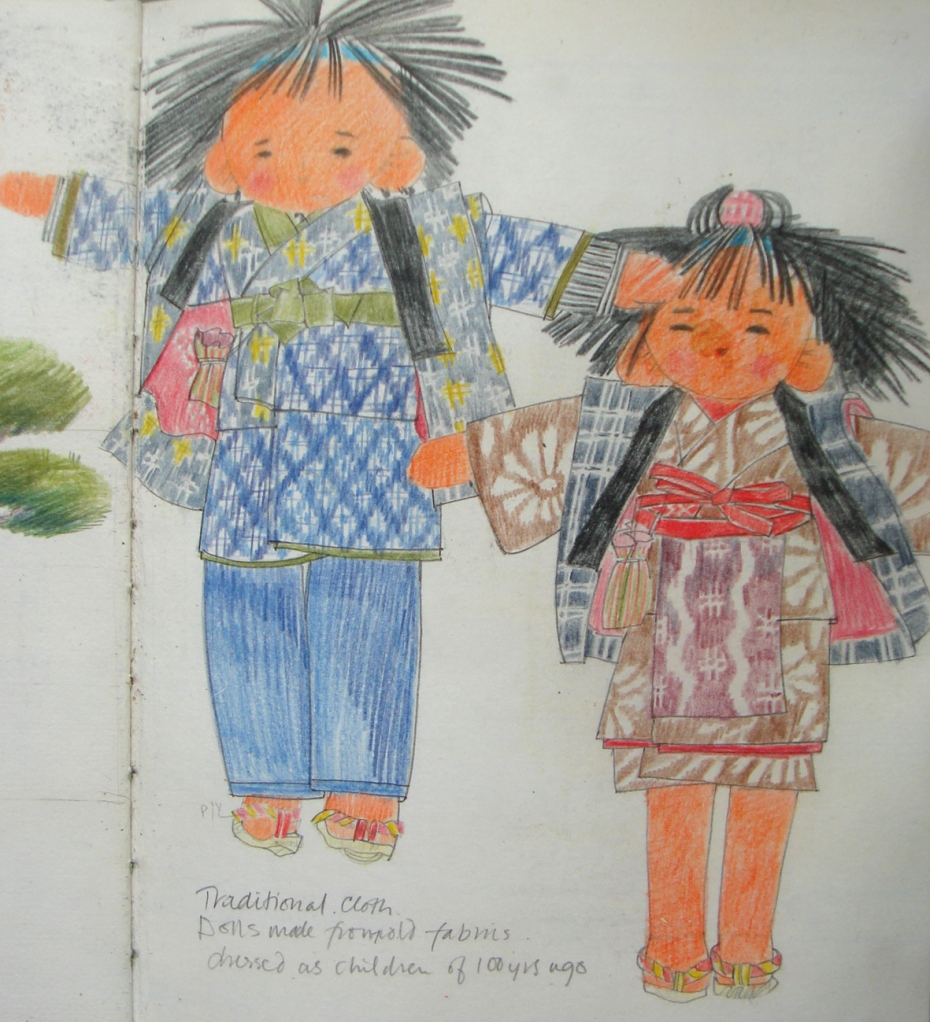 rustic dressed dolls from a museum

So looking thought the day book now I am intrigued by what I  eventually did make with all this information. I will try to show some of the results in further blogs, but right now I think that the visual mind has a strange way of making connections between disparate stimuli, because I made work for a patchwork book from this study trip….

and now some 30 years later I am eventually giving classes in making kimono.