On the subject of hearts…..searching my archives for more heart pictures for the Gallery section I remembered the stuffed and beaded hearts I used to make. Above is the first beaded heart I bought, it is probably from the first world war; the ribbons were specially woven for soldiers and sailors for giving as gifts. Here the military ribbon forms the centre- piece of this ornate pinned and beaded heart. I found that it had been stuffed with sawdust and so that is what I always use; sailors often used sand. Below is a much larger heart made by a sailor and again I think, from the early 2oth century.

But my favourite heart is this  dusty and damaged one; 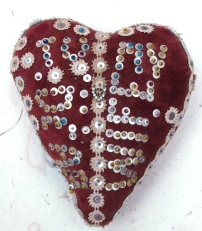 I started to make the hearts for presents, just to give to family and friends but they were so popular with people who saw them when visiting my studio that I made a few to commission. The first ones were for wedding presents, a mother for her daughter, I remember it was a winter wedding and the colours used were from the floers of the bouquet which are embroidered in the central panel. The writing is in cross stitch

Following this I made several wedding presents and left, a first anniversary present – again given by the mother of the bride -I can see the date is 1992 and is made in tiny real gold pins. The couple’s initials stitched in the top curves of the heart in padded satin stitch. I used to embroider family portraits and had some years previously embroidered this daughter as part of a larger piece, so it was really special to have this commission.

Not given to very romantic gestures on my own behalf this next heart, encrusted with all sorts of wonderful scraps of embroidered textiles, was actually made for my book, Crazy Patchwork – published in 1998 (by Collins and Brown ISBN 1 85585 641 7)

I have also made several hearts to celebrate births and naming ceremonies. Pin cushions were given as gifts for weddings and for a new child as originally when they were made by hand, pins were  very expensive; so small stuffed cushions with pinned messages were presented to both brides and new babies as symbols of good luck.

The small pink heart ( about 8 cms ) was a first birthday present to my nephew’s daughter Brannie and the glamorous heart below is for the daughter of my husband’s nephew, Ziva.

The hearts I make are all fairly small between 8-12 cms. deep, but they feel very good in the hand, a satisfying weight and shape to hold easily. I have made a few smaller ones mostly for workshops and for some reason the one below has stayed with me, it hangs in various places in the house, at present around the neck of an angel

on the landing between the bedrooms and the studios.