Last month at a party in London and  I was asked by Anne Coggle, a friend of the hosts, if we ( Steve my husband and I) would like to make a piece of work each for a charity which she supported; when she explained that it was the Dog Project, ( information available at simon@dogprojectart.org) I accepted at once. I had seen the earlier Dog Project which was for Great Ormond Street Hospital, Boil, the dog was originally drawn by a child being treated there. I was delighted to be offered the chance to get involved apart from the obvious enjoyable contribution to a good cause – most of the currently fashionable artists and designers had made works for the last project, as well as many children from the hospital.

first doodle for making Boil into a fox terrier.

The new charity is for The Evelina Children’s Hospital which features on YouTube. After a few weeks 2 packages arrived for us, each containing a small stretched canvas with an outline drawing of Boil, and there were  several more copies on very good quality drawing paper –  to practice on, how thoughtful; plus  lots of information and illustrations of other works inspired by Boil.

From the moment Ann mentioned the project I knew I had to embroider him, but how? My first idea was to make him into a Wire Haired Fox Terrier and I immediately started doodling on the letter head as I was checking the package out. But Boil had too much character to be dismissed so easily.

drawing for a crazy patchwork version of Boil.

I considered what a strange shape he was and realised that he could be made up in patches, so a crazy patchwork was the obvious answer – and as it is a children’s charity it would make a cheerful, colourful and hopefully saleable work when  eventually auctioned

Meanwhile Steve got on with his version, he saw him as a sort of Henry Moore sculpture on the 4th Plinth in Trafalgar Square, London – aren’t imaginations amazing? 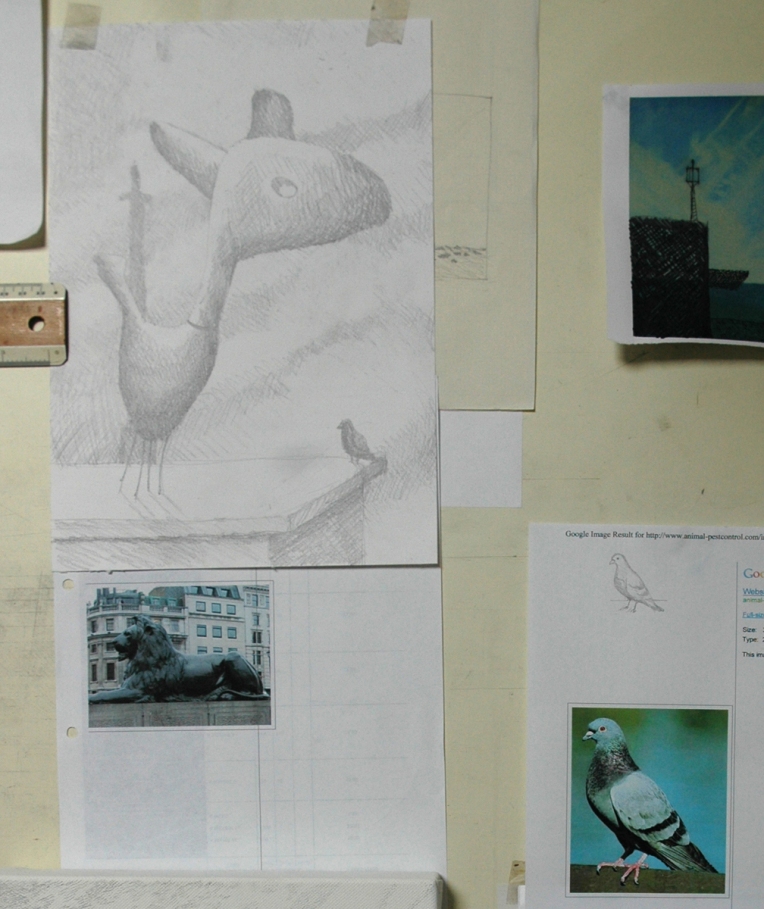 drawings and reference for Boil aloft on the 4th Plinth

when I look at the finished works they are so amusing and telling. Here in response to the exact same project our two completely different visions and characters are illustrated; he is all cool, finely modelled academic drawing..

while I am all clashing colour , riotous pattern and wonky decoration….

but both works exhibit various aspects of the good humour we share.

If you are interested in getting involved in working on a dog portrait for this project please contact Simon Freeman on simon@dogprojectart.org for more information and please say you heard it from here.